Please accept our best wishes, all glories to our founder Acharya Srila Prabhupada.

This month we would like to share a short report on the Bhakta course, inform you about the online evening programs at Goloka Dhama, and relate a beautiful story about loving devotion.

This year’s Bhakta course (introduction to theology, philosophy and spiritual practices) is ending successfully. It was the first time that the teachers were having such a program online and it worked out very nicely. We had 19 students who were very inquisitive and eager to learn. The course lasted for 4 full week-ends with 8 lessons each. One special advantage of the Bhakta course presented by Goloka Dhama is the great variety of mature teachers (Damodara Priya dd, Gaurahari d, Vaijayanti dd. Sudama d. and Advitya Baladeva d).

We like to express a special thank you to Dhamodara Priya who was the main facilitator and organiser of the entire course. Our wish is for all the students to become dedicated servants of Srila Prabhupada´s mission and help with the re-spiritualisation of the world by their examples and wisdom.

After the Kartic month last year, Bala Govinda Prabhu started daily Bhagavat Gita lectures in the evening. Since that time, it has been maintained and even improved with a variety of lectures and speakers. At the moment, we have Japa practice and meditation, Bhagavat Gita discussions, Gaura Lila Katha, Krsna lila Katha and Discussions on the Maha Bharata.

Whilst the Corona Crisis is still a great impediment to close association with devotees, we are happy to provide these lectures online on our Goloka Dhama Facebook account. For more information about the timetable, please see the picture below. 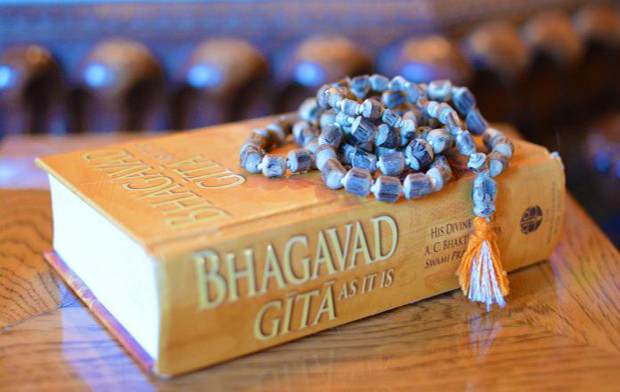 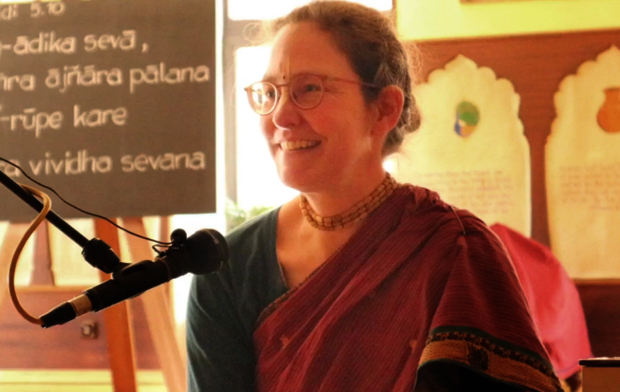 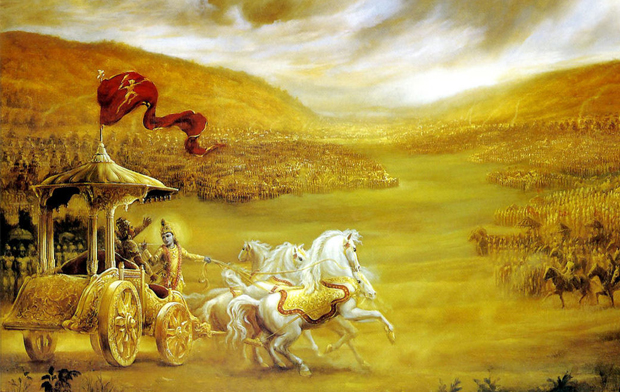 The scriptures are full of descriptions about the glories of the Supreme Lord but often (like in the case of the Srimad Bhagavatam) the devotees of the Lord are even more glorified. For example we will find 4 chapters about Prahlad Maharaja but only one on Lord Narasimhadeva. Because we were celebrating Rama Navami on the 21st April, we were given the opportunity to listen to the beautiful story of Shabari.

She was the daughter of a low-class hunter and she later married a low-class man; who was a thief and a drunkard. When she could no more stand the immoral activities of her husband, she left to live in the forest and dedicate her life to serving God and his devotees.

Every day, very early in the morning, she would sweep the floor to remove the thorns and branches so that later in the morning the saints and ascetics who were living in the forest could walk peacefully on the path to the nearby lake. She would also collect dry wood and place it close to their thatched cottages so that they could use it for cooking and yajnas.

Noticing the service of Shabari, the most prominent sage known as Matanga instructed his disciple to find out who was doing such a nice service. The next day, very early, as Shabari was doing her service, she was brought to Matanga by his disciple. Being from a lower class, Shabari was very afraid and could not even look at the saint. Matanga gave her shelter in his ashram and initiated her in the chanting the Rama´s Holy Name. This was not appreciated by the other so-called saints at all, who thought that a low class woman should not be initiated.

Shortly before leaving this world, Matanga gave Shabari a blessing that Lord Rama would personally come to see her. Every day, for many years, Shabari was waiting with great longing for the Lord to come and visit. She would collect berries daily, try them and offered only the sweet ones to the Deity of Lord Rama. This did follow any Scriptural rules but she was doing it to offer the best to Her Lord. She was now very old but her longing sustained her.

One day the message came that Lord Rama, together with Laxman were passing through that region in search for mother Sita. All the sages were waiting to see Lord Rama but when he appeared, he just asked them: “Where is Shabari?” The sages were shocked that the Lord had such an interest in a low class woman and waved in the direction of her cottage.

Shabari was so humble that she hid when she saw the Lord approaching. Lord Rama called her and took her hands in His. Trembling, she gave seats to Rama and Laxman and offered Rama the berries she had tasted that morning. Lord Rama accepted them with gusto. Knowing the state of Shabari, Laxman tried to forbid the Lord to eat the berries thinking them to be contaminated by the old woman but Rama accepted her pure loving sentiments.

This story is a great example of a unique love a devotee had for Her Lord. Shabari is our teacher in Patience, Determination & Enthusiasm. This story also exemplifies that the Lord is mainly interested to our love; even if our social status is low or we lack qualifications.

With our gratitude for your continual support.

On behalf of Goloka Dhama community,