… ”One night he called Yamuna to his room. An Indian friend had donated 10-inch brass Radha-Krishna deities. Prabhupada asked if she could paint them. She protested that she couldn’t paint – that she would spoil them – but he said that he would teach her how. She got some of the paints that Syamasundar had used to paint Jagannath, and the following evening she sat with Prabhupada late into the night. By the light of his desk lamp and under his watchful gaze, she painted the deities‘ eyes, outlining them with a black line, gave them solid red lips, and made lotus petal designs on their bases. Prabhupada kept these deities until the time would be right for them to be worshipped.”….

… ”They returned to Hamburg for a grand festival to install the deities. Tamal Krishna performed the fire sacrifice as Prabhupada has taught him and Yamuna bathed and dressed Radha and Krishna and supervised the setting up of the altar. Thus on 23rd November Europe’s first Radha-Krishna deities were installed in Hamburg. Kulashekara and Vishakha took up the daily worship and the London group returned to England. ISKCON now had two temples were Radha-Krishna deities were worshiped….”

… ”In the middle of our busy concert schedule, one day was set aside for performing the installation of the Radha-Krishna Deities. Were it not for Prabhupada’s order, I would not have been considered qualified to undertake such a serious responsibility… In Los Angeles, as in all of our temples, the standards were still simple enough that all of the worship could be handled by a single pujari. I had never even offered an arati…. But all of my insufficiencies were more than covered by the intense desire of Srila Prabhupada. It was he who was actually installing the Deity, and I was simply the officiating priest… As I went through the motions of acamana, vibrating the sacred mantras, bathing and dressing the Deities, and finally igniting the sacrificial fire, Prabhupada was the guide directing every action. With each successive “svaha”, the devotees threw grains mixed with clarified butter, and the fire blazed brightly. Krsna was pleased; it was a successful sacrifice. At the end, with Radha and Krsna installed upon Their throne, we offered arati and danced and sang ecstatically to celebrate the auspicious occasion of the Supreme Lord’s appearance.”…”Thus, on November 23, 1969, on the auspicious full-moon day commemorating Sri Krsna’s rasa-lila pastime, the first Radha-Krsna temple in Europe was inaugurated…”

(Tamal Krsna Maharaja, in “Srila Prabhupada and His Disciples in Germany”, p. 74/75)

…”Because income was scarce, the basic expenditures for rent and maintenance had caused debts. Seeing no solution, Yogesvara, the temple president, wanted to close the temple and bring the Deities to London. We built a palanquin for Their Lordships, and during our journey by ferry, we conducted all the regular worship until we reached Bury Place.”…

(Jay Gaura Prabhu, in “Srila Prabhupada and His Disciples in Germany”, p. 121)

Hamburg, 1971…”The standard of Deity worship was extremely simple. We didn’t know anything about chanting special mantras. While chanting Hare Krsna, we simply poured a lota of warm water over the Deities. The paraphernalia was kept on one of the shelves of a cupboard in the prasadam room, where the devotees kept their bowls. Radha and Krsna had five outfits and Lord Jagannatha three. Every morning I stood before the little drawer with the Deity clothes and thought, “My god, which outfit shall I put on today?” In the very beginning we used the same garlands for several days. In the evening they were put into water to keep them fresh until the next morning…”

(Astaratha Prabhu, in “Srila Prabhupada and His Disciples in Germany”, p. 140)

Paris, 1972:…Prthu Prabhu: ”The devotees had planned to have an installation ceremony of a medium-size set of marble Radha-Krsna Deities, and thus they were putting all their energy into making the preparations. Vasudeva was painting the altar, and, in fact, practically the whole place was wet from fresh paint. But when Srila Prabhupada assessed the situation, he became doubtful whether the French devotees would be able to provide the necessary standard of worship. He said, These Deities need nine brahmanas to worship Them. Do we have these brahmanas?” When the reply was negative, Srila Prabhupada suggested that it was better not to install Them, but wait.”

Astaratha Prabhu: “As soon as Hamsaduta heard about this, he went up to Srila Prabhupada’s room and said: “Prabhupada, I want these Deities!” Prabhupada simply said, “Then take Them.” In this way Radha-Madana-Mohan came to Germany. For almost three years, They remained in Their Indian metal trunk, because whenever Hamsaduta asked Prabhupada for permission to install Them, Prabhupada’s response was the same: “Wait.”

(Srila Prabhupada and His Disciples in Germany, p. 183)

Germany, 1974: …”A country castle, Schloss Rettershof, was only a twenty-minute drive from Frankfurt, Germany’s financial capital. It nestled in the hills near Königstein, a village in the Taunus, where many Frankfurt bankers and entrepreneurs had villas. Although the rent was high and getting the place meant closing the city temples, Hamsaduta was tempted… So he rented the place.”…”Within a month and a half, the 11th-century castle was converted into a beautiful temple fit to receive the small Radha-Krsna Deities presiding in Hamburg and Their pure devotee, Srila Prabhupada.”

1975, Astaratha Prabhu: …”After the Mayapur festival, Hamsaduta asked me to remain in India for another week and buy paraphernalia for the marble Deities he had taken from Paris in the summer of 1972. He wanted to install Them as soon as possible. I was surprised. Whenever Hamsaduta had asked Srila Prabhupada for permission to install Them – in Heidelberg in 1973 and during his visit to Schloss Rettershof in 1974 – Prabhupada had told him to wait.

“In Mayapur, Hamsaduta decided to take matters into his own hands. He told me, “I am just going to install Them now; otherwise, it will never happen.”…”When I returned to Germany in the beginning of May, the preparations for the installation were in full swing. On Sunday, May 11th, 1975, Hamsaduta performed the installation ceremony in the simple style common in ISKCON in those days, and he gave the Deities Their names: Sri Sri Radha-Madana-Mohan. He told me he would write to Prabhupada about the installation.”…”Thus, on May 15th, Hamsaduta wrote a letter to Prabhupada requesting his permission for installation. Only ten days later, he received the short, unmistakable answer: “There is no need of establishing a Deity for the time being. Simply make a nice preaching center.”…Srila Prabhupada in a later reply: ”Regarding the Frankfurt temple and the Deity program, unless we have got our own building, this proposal of installing Deity should be postponed. Do not install the large Deities, unless we have got our own building.”

(“Srila Prabhupada and his Disciples in Germany”, p. 353ff)

These were Srila Prabhupada’s words. He did not approve Deities to be installed in rented places. Once the Deities are installed, They should not have to move anymore from there. “…If there is the possibility of regular worship, then you can install Jagannatha Deity. Otherwise don't do it. Not that there should be a repeat of the situation in Hamburg that the Deities were taken away. Unless there is solid temple arrangement I don't advise you to install the Deity. Deity installation means regular worship without fail and for good….”

In late spring 1980, the devotees had to leave Schloss Rettershof and Sri-Sri-Radha-Madana-Mohan were shifted to the farm-temple in Jandeslbrunn, Simhacalam, where They were worshipped together with Lord Nrisimhadeva for 17 years.

In the summer of 1997, Sri-Sri-Radha-Madana-Mohan were moved again. This time to Their final destination. They were brought to Abentheuer, Goloka Dhama, a beautiful region in Hunsrück-Hochwald, and the entry-gate into a national park where many hikers pass by.

Sri-Sri-Radha-Madana-Mohan felt overpowered by Lord Nrisimhadevas impressive grandeur and presence and chose to have Their own place. They were welcomed in Goloka Dhama with a huge maha-abhisek, where all the Deities, inclusive the big ones, were bathed. That ceremony was considered to be a second installation, now in the place which will be Their Lordships’ “eternal” home.

Amazingly enough, soon after They moved to Goloka Dhama, They started to change Their look. Srimati Radharani was a small girl with chubby cheeks on the farm, but once in Goloka Dhama, She seemed to mature and became an attractive young lady. They wore heavy silver crowns on the farm and dresses which fell straight, They now started to wear turbans and Their clothes give more and more an impression of swinging and dancing.

It was in Goloka Dhama where matajis started to attend to the Deities on the altar. Soon the female pujaris became the majority and that has not changed anymore until today. Srimati Radharani is clearly reigning the place and arranging everything for the pleasure of Her beloved Madana-Mohan. 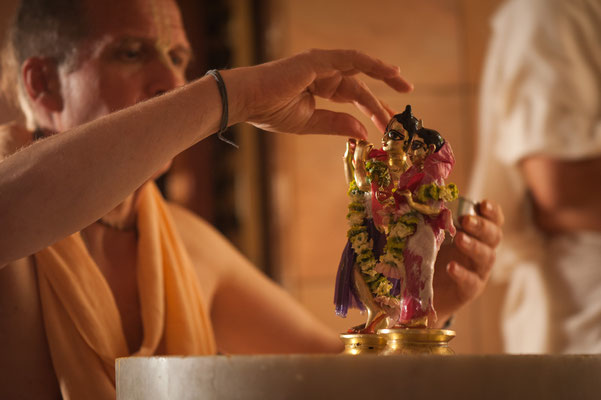 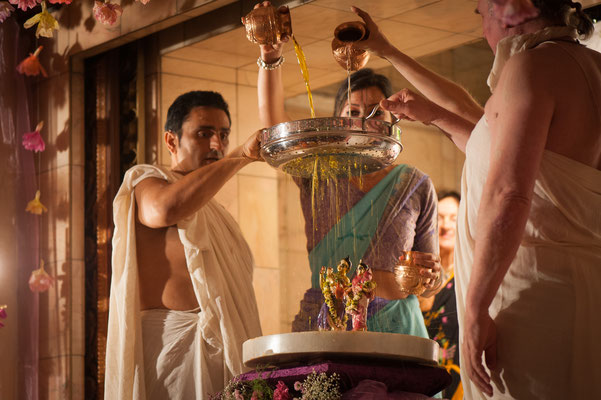 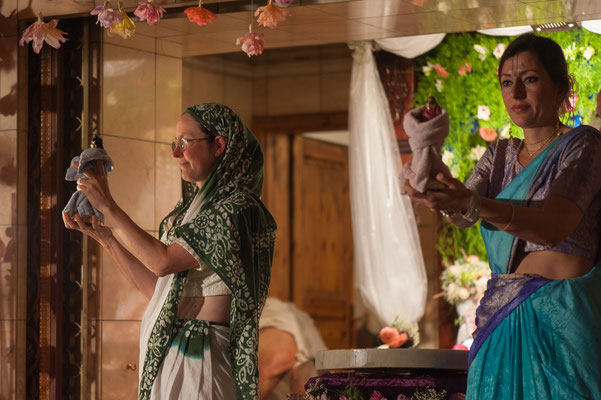 Along with Them came 19 salagram-silas, one Dwaraka-sila, Sri-Sri-Gaura-Nitai and of course Chota Radha-Krishna from Hamburg. In the end of 2008, one sweet Govardhan-sila, Gaur Mohan, joined the team.

The Deities are quite active and love to show Their presence to the devotees. For example, one devotee once prayed to Them to get a red pullover. He did not speak to anyone about it. But on the same day, another devotee went shopping and saw a red pullover in the shop. He bought the pullover, thinking to donate it to that pujari out of no obvious reason. The pujari was very much surprised to get his desire fulfilled the same day! Of course, he felt sad to even have had such a desire.

Another time, the same pujari came into the kitchen to prepare the offering-plate, but the cook was not yet ready. The two of them started to argue about what is more important, punctuality or devotion. When the pujari who was insisting on punctuality was checking the signal-watch in the kitchen, it had a different time then the same signal-watch in the Deity-room and still a different time than the exact same signal-watch on the altar! That blew his mind! How is that possible! Finally, the pujari was convinced that Radha-Madana-Mohan prefer devotion.

Once a young bhaktin was praying late in the evening: ”Please, my dear Radha-Madana-Mohan, throw me out of the bed tomorrow morning at 3.45 am, so that I am on time for mangal-aratik.” – Next morning, that bhaktin woke up, laying on the floor. She had fallen from her bed-trunk, what had never happened before and did not happen anymore afterwards. Half asleep, she remembered her prayer from the evening before and checked the clock, it was exactly 3.45 am! 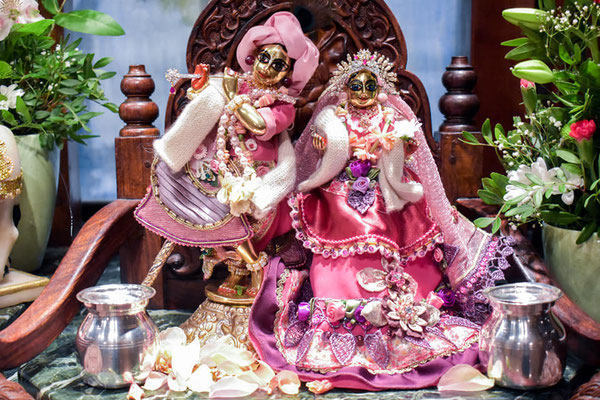 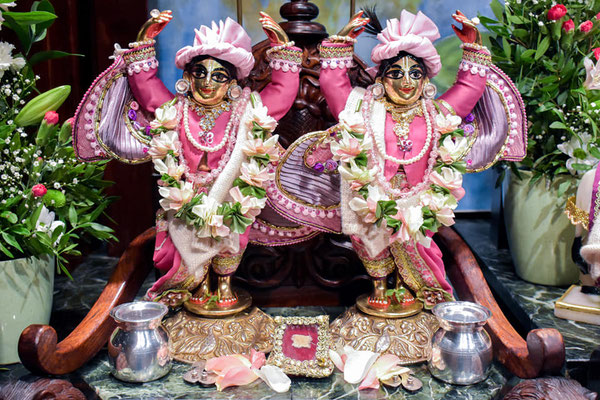 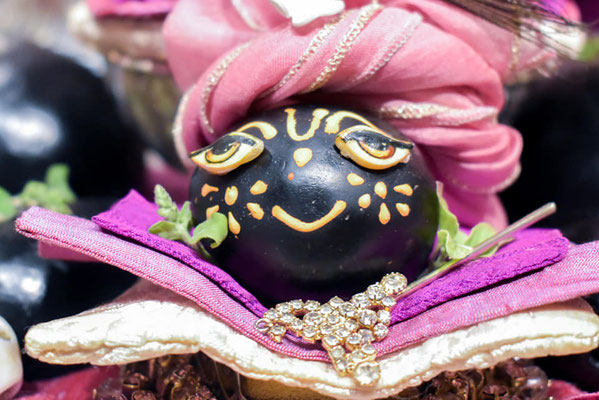 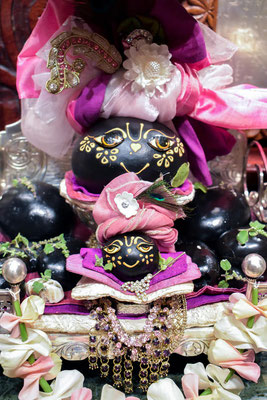 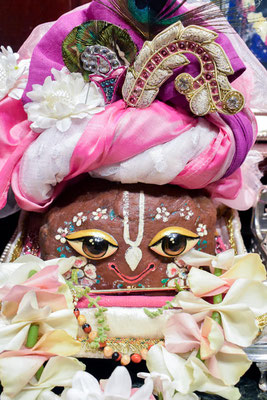