Dear Friends and Devotees of Sri-Sri-Radha-Madana-Mohan

Please accept our humble obeisances. All glories to Srila Prabhupada.

The story goes as follows:

One day Sri Krishna was sitting at Radhakunda, lamenting about not being able to get the darshan of His beloved Srimati Radharani. His dear friend Subal Sakha was sitting next to Him, thinking of how to help Krsna. – “I have an idea, Krsna! I will go to Yavat and bring Radharani here! You will see!” Thus said, Subal jumped up and happily ran towards Yavat, the hometown of Radharani’s in-laws.

Since Subal’s family was related to the family of Radharani’s in-laws, he could freely enter their house, without being stopped. Jatila, Radharani’s mother-in-law, saw him, “He Subal, what’s the matter?” – “Oh, respected Jatila, my calf was running away. Let me just have a look into your courtyard, it might have entered here!”, Subal shouted. – “Yes, yes, just look after your calf!”, Jatila was peaceful, she knew Subal as a well behaved boy with proper conduct.

Subal crossed the courtyard and went straight into Radha’s chambers. There Srimati Radharani was sitting on Her bed in great agony. Her heart was yearning to meet with Krishna, but since Jatila was sitting in the courtyard there was no chance for Her escaping the house without Jatila noticing it. What could be done then? – Radha’s girlfriends, Vishaka and Lalita were trying to pacify her. There must be a way to trick Jatila and to bring Radha out of the house!

When Subal entered the room, Radha’s anxiety to go out and meet with Krishna grew even more. Just then Lalita saw a calf passing outside the window and immediately she devised a plan, “Just wait a moment!”, and she run out to fetch the calf. Then she asked Subal to change cloths with Radharani. The two of them had the same bodily color and were of similar size, so Subal’s cloth fitted nicely to Radha. To cover the breast Lalita gave the little calf in Radha’s arms. – Dressed as a cowherd-boy, Radha went into the courtyard. There Jatila saw Her, or him coming, thinking it was Subal, she called, “So, did you find your calf, Subal?” – Radha, in the voice of Subal, just murmured, “Hm, hm” and quickly ran out of the house.

Arriving at Radhakund, Radharani in the dress of Subal saw Krishna sitting there, in a desperate mood, waiting for Radha to come. Radharani approached Krishna slowly and when He saw Her, He became even more morose, “O Subal, you did not succeed in bringing Radha here, you came back alone!” – Krishna did not recognize Radharani! – She jokingly kept Her disguise for a while, just to see Krishna’s longing for Her. Then She could not any longer hide Herself before Him and gave up Her disguise. The two then happily spent some time together undisturbed.

This and many more sweet pastimes of the Divine Couple are going on during the month of Kartik, all meant for us to relish and share them with others, thus enthusing and inspiring one another. kathayantas ca mam nityam – tusyanti ca ramanti ca, BG 10.9, “…they derive great satisfaction and bliss from always enlightening one another and conversing about Me.” 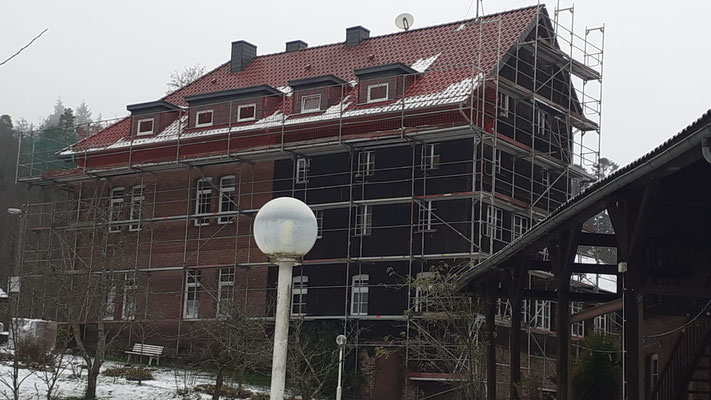 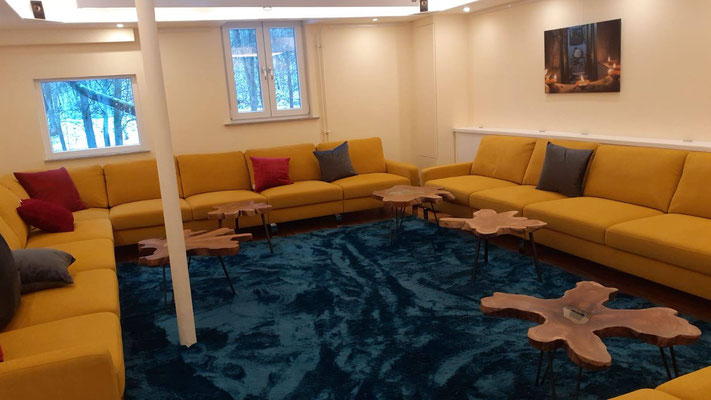 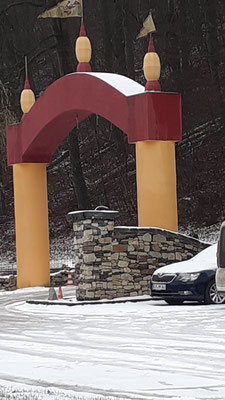 Next to all of these sweet happenings during the last month, there was also some progress in the field of renovation and construction going on in Goloka Dhama. The guesthouse got a new roof, in the Bachhaus a new meeting-room opened its doors and at the entry-gate appeared a beautiful natural stone wall. – These are just the beginning-steps, announcing bigger ones to come soon! We will keep you updated! J

Your servants from Goloka Dhama